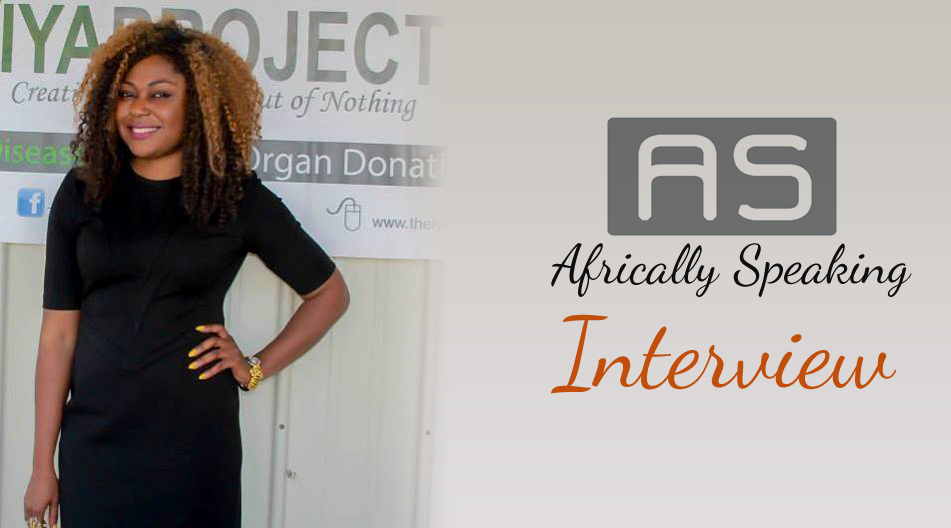 Giving Life
BY AFRICALLYSPEAKING ON MAY 25, 2015

While her peers kicked up dust in playing fields, a 7-year-old Iya Bekondo hung out with kidney doctors. Then a transplant turned her into a woman on a mission.
By Ngum Ngafor

Hello Iya and thank you for speaking to AS. Let’s start with The Iya Foundation which you created in 2013. What is it about?
The foundation is a gift of life. We aim to educate people about kidney disease. The condition is a silent killer because it doesn’t start showing until when a kidney is working at about 25% capacity. As such, it is very important that we raise awareness about it.
How did you come to set up the organisation?
I was diagnosed with kidney disease as a 7-year-old. Fortunately, my mother, who is a nurse, picked up on my early symptoms of puffy eyes and feet. My stomach also swelled up. After several tests, I was found to have proteinurea (protein in urine). That is when my journey began.
Years later, my family decided that it was best for me to get advanced treatment in the United States, so I moved here from Cameroon. After settling in, I started school and joined a volunteering organisation called Americorps. The experience exposed me to tutoring opportunities at a housing facility for single mothers and work at soup kitchens. One semester, I became severely ill and couldn’t help out as usual. At that point, my mother had been found to be a suitable kidney donor. However I needed [costly] anti-rejection medication to get the best outcome from the operation. When my colleagues at Americorps found out about my situation, they decided to support me by organising a fundraiser. In my little living room, we hatched the Iya Project.
Within two years, we raised $40,000. The kindness of many people, some of whom I did not even know was humbling and inspiring. I knew I had to pay it forward.
One of your main aims is to tackle the social stigma associated with renal disease. How did it affect you and why do you think people treated you differently?
When I was growing up, kidney failure was not just uncommon in Cameroon, it was highly unusual for a child to be affected by it. Some mistook my condition for lupus while others thought it was sickle cell disease. There were also people who thought I had been bewitched!
As a teenager, boys shied away from dating me. A tube in stomach may have been good for dialysis but it was not exactly attractive. I was also very thin and often had bloodshot eyes and a dull complexion.
In fact, my mother’s decision to donate her kidney to me amazed a lot of people, as they thought I was dying.

Read the rest of the article here: https://africallyspeaking.wordpress.com/2015/05/25/giving-life/